Last year the craze was washi tapes, now it's loom bands. People nowadays are really into crafting and doing DIY stuff. Some would do it as a way of expressing themselves through their unique and personalized creation while others would just collect for the sake of being in the trend and be able to start a conversation with like-minded people.

What are Loom Bands?

They are those small colorful rubber bands that are weaved together using a plastic loom board to make bracelets, necklaces and even charms. And the most common design is the fishtail. Rainbow Loom was the very first brand who started this craze.

The Rainbow Loom was invented in 2011 by a DIY engineer dad named Cheong Choon Ng from US. He saw her daughters weaving elastics bands over their fingers. When he tried to join in, he found out that his fingers were too big. And so he built himself a "loom" and thus Rainbow Loom was born.

As of this time, the craze is still at its peak. I'm not familiar with the price but it's literally everywhere. The original ones are sold in the malls while the imitations are scattered left and right along sidewalks particularly in Divisoria. They are usually sold by grams with varying colors to choose from: solid, mixed or glow-in-the-dark elastic bands. Loomers would usually learn from YouTube tutorials or from their kids or nieces. But if you think that you need an expert loomer to teach you in person, then here's a workshop for you.

Manila Workshops, in partnership with Mothercare and Loom Princess, presents to you another Memory Crafters series, the Loom Band Afternoon Party Workshop.

Whether you are a beginner or already an expert in loom band making, you are all invited in this party. Here, you'll get to learn to create new loom bracelet designs and get to interact and bond with your fellow loomers. What a great place to learn a new crafting skill for wanna-be loomers or get to show-off your talents for those advanced loomers. 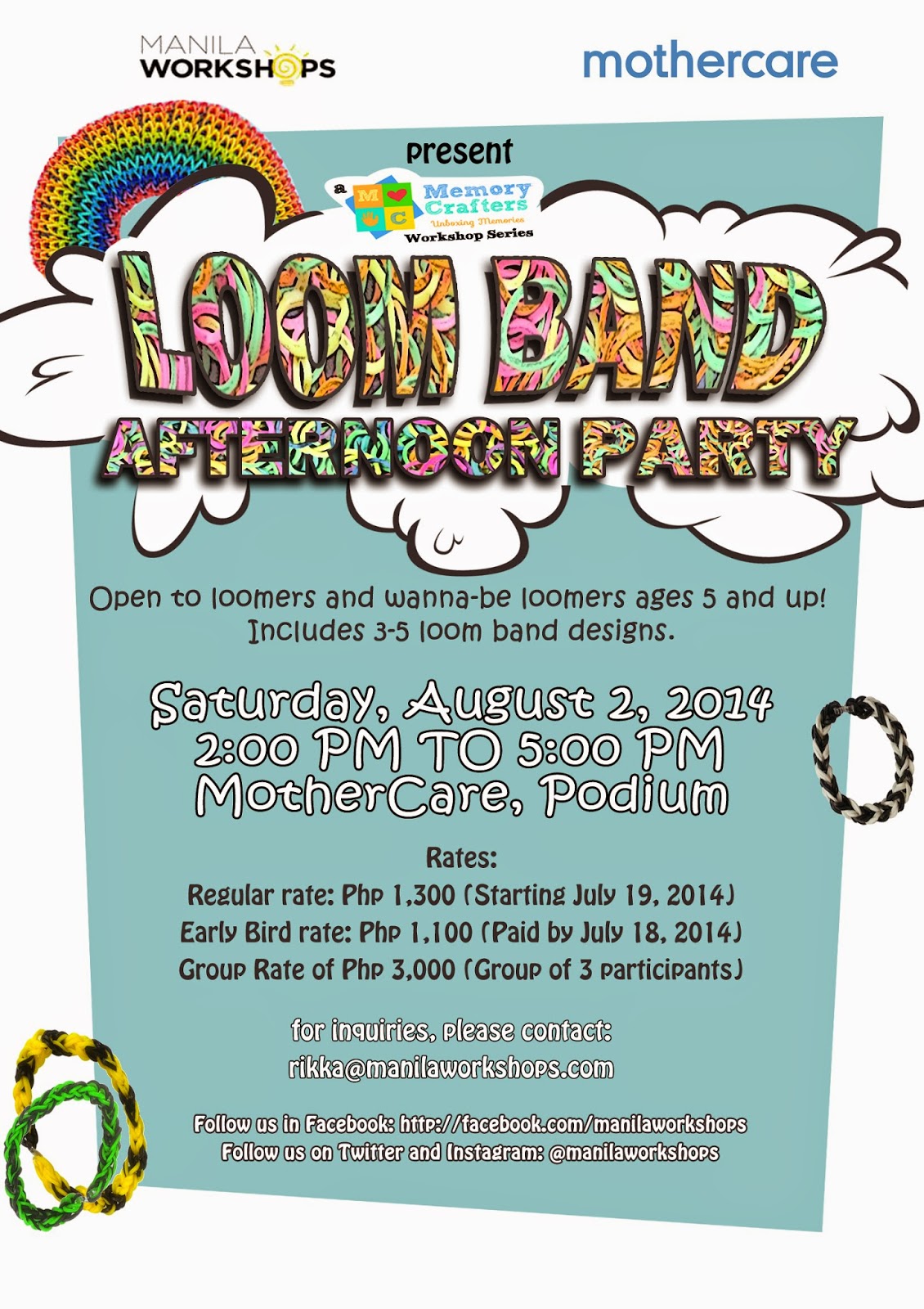 The lady behind Loom Princess is none other than Ms. Raissa Puno-Diaz, the trainer for this workshop. She was also the trainer during the last Loom Band Party held this May. You can click the links to know more about her profile and loom creations.

Come and join this looming craze now before it's too late! Don't forget to invite your loomer friends as well.

Email ThisBlogThis!Share to TwitterShare to FacebookShare to Pinterest
Labels: workshop