Because Aug. 1-7 is World Breastfeeding Week, I would like to dedicate this blog post to the support group that had helped me, in one way or another, to succeed in my breastfeeding challenges. This Facebook support group is none other than the Breastfeeding Pinays which I have been a part of for about 6 months already when baby was still 2 months old.

It's a fairly new group which started just this January 2013 by Ms. Abie Co-Floreza together with the other 6 admins namely: Bing Guevara, Clarice Avinante, Velvet Roxas, Ting Patriarca, Pittipat Chupungco and Rachel Terrobias. I have met four of them in person while the last three, I have yet to know them. The group was created to provide online support and information to families who are interested and who believe in breastfeeding. They are a bunch of supportive, helpful and passionate breastfeeding advocates who try to answer member's concerns to the best of their knowledge and personal experiences.

As of now they have close to 4,000 members already which means that more and more people believed in the group and found it helpful in their breastfeeding journey. Even if you don't actively participate in the forum discussions, but by merely joining the group, you can also learn from the questions and answers posted by other members. Some of your concerns might have been asked by others as well.

And to further reach out for more people and bring awareness to the whole nation, the admins together with other breastfeeding communities and advocates have decided to organize a breastfeeding mob. And I'm proud to have graced the said event together with my Baby A.

The breastfeeding mob was held last Saturday Aug. 3, 2013 inside Aristocrat, Roxas Blvd. due to heavy rains instead of the initial plan which is supposed to be at Rajah Sulayman Park in Malate. I have been looking forward to this event as it would be my first time to join a rally. Unfortunately, rain started pouring so hard in the afternoon almost nearing the assembly time. Baby and I were all set for the mob while waiting for my mommy friend Edel to arrive so we can hitch a ride. However, the weather worsened, flooding the streets in Edel's place and making it risky for her to traverse. We were mulling over if we will still continue because we are afraid to get stranded along the way. But because we are one proud Breastfeeding Pinay mommies, we couldn't take not to partake and support this movement that we both believe in.

I had baby wear a jumpsuit, bonnet and covered her with a blanket upon entering Edel's car as the rain was really hard. My mom even warned me not to go out that day but I disobeyed. It was almost quarter to three when the rain slowed down while on our way to Aristocrat. We were so excited!

Upon arriving at the venue, we were surprised to see a big turnout. Mommies with their babies were already in their formation and have started parading. We hurriedly signed in at the registration area, signed a waiver and wore our sticker ID. We were quite confused as we don't know where to line up as the mob was about to start. With the moms already seated on the floor preparing to latch their babies, we also rushed to find our space to settle down and do the latch or "hakab". 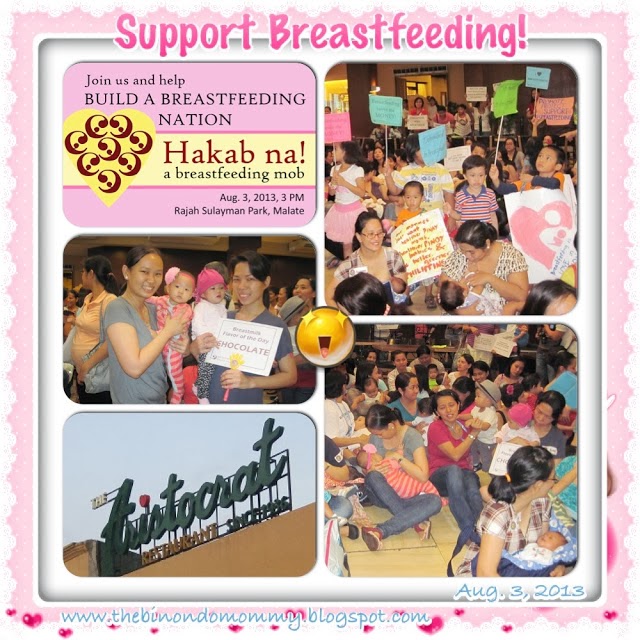 "Hakab na! Hakab na! Hakab na!" was the battle cry of the flash mobbers while latching their babies in front of the several media people. I couldn't believe that I was able to do it in public without a nursing cover. It was liberating for me as I grew up from a very conservative family thus the times that I tried feeding in public was very rare. This experience allowed me to boost my confidence to feed in public and to love breastfeeding even more. I came to realize that I made a good decision to resolve nipple confusion as soon as possible. Now I can easily feed my baby anytime anywhere without worrying if the stored milk I brought would be enough, worrying of the spoilage and lugging around breast pump paraphernalia.

I hope that after this breastfeeding mob, where approximately 225 moms (more than 100 in Manila, 90 in Cagayan de Oro, 30 in Davao, 5 in Bacolod) did the "hakab" all on the same day, breastfeeding would become widely accepted and become the norm around the world. I also hope that expecting moms and soon-to-be married ladies would be convinced and put breastfeeding as their top of mind. That's our responsibility as moms, to give what is best for our babies.

I'm glad to be part of Hakab Na! A Breastfeeding Mob 2013, the first in Philippine history. Hoping for more breastfeeding awareness activities in the years to come.

Congratulations to the Breastfeeding Pinays for a peaceful and successful event!

P.S. Thanks Edel for the ride, for without you, I won't be able to make it as well. Cheers!