The first time I encountered the word Superbook was from Mommy G who have attended the launching last May 25, 2013. It didn't ring a bell on me as I didn't know what it was in the first place. I even thought that it was something about books. But because of the frequent announcements that kept appearing on my Facebook wall, I began to get curious thus started reading about it. I learned that it was a TV series for kids that talks about Bible stories. And the first episode was aired last June 1 Saturday.

To those who are not familiar with Superbook, just like me, I've done the research for you. First of all, Superbook is a registered trademark of The Christian Broadcasting Network Inc. or CBN. As lifted from their website, here's an excerpt:﻿﻿


"Superbook is an animated series born out of CBN's desire to promote the Bible to the Japanese public. Early research determined that the best way to promote interest in the Bible to Japanese children would be through popular genres of animation and comic books.

The success of Superbook in Japan, in terms of high audience ratings and increased sales of Bibles, convinced CBN to have the series dubbed into English and marketed outside of Japan.

Since 1983, the Superbook animated series has been dubbed into over 40 languages and broadcasted in well over 80 countries and has impacted the lives of thousands of people throughout the world. Superbook's success has gone way beyond the scope of what CBN had originally hoped for it and it continues to touch lives on broadcasts throughout the world today.

Visually cutting-edge and written with modern-day kids going through modern-day dilemmas, the new Superbook animated series still aims to get kids excited about the Bible. This is keeping with CBN's vision of strengthening Bible literacy, bringing the gift of the Bible to the children of the world."

And that's the reason why I haven't heard about Superbook -- because I was not yet born when the original series was aired on TV. After having seen some portions of the previous episodes, I would highly recommend kids to watch Superbook because not only does it retell some famous Bible stories in an appealing 3D cartoon animation but it is also presented in such a way that children can easily relate to. It's a story within a story that teaches Christian values to kids which they can apply in their day to day activities. There's always a moral lesson by the end of an episode. Plus, The Salvation Poem played at the end of each episode really gave me an LSS (last song syndrome). It's so fun to sing-along and the message is also nice.


I am grateful to be invited to grace their recently concluded event: Superbook Bida ng Pagbabago Roadshow held last Aug. 4, 2013 Sunday at Robinson's Place Midtown in Malate with Superbook Agent Bettinna Carlos as their host.


The event's highlights were as follows:
1. Trivia questions with multiple choice about Superbook's past episodes.


4. Puppet and magic show by Zam - all kids were entertained and really had a good laugh on Zam's magic shows and comedy.


5. Go Fish! game - where it teaches kids to help one another, rain or shine.


6. Project E6:1 game - where it teaches kids to listen to their parents as mentioned in Ephesians 6:1


7. Bida ng Pagbabago pledge - led by Superbook Agents Bettinna Carlos and Benjamin Alves to challenge the kids to be Heroes of Change in their communities

8. And lastly, photo op with Gizmo the robot


The kids there really enjoyed and loved Superbook. They are certified Batang Superbook! 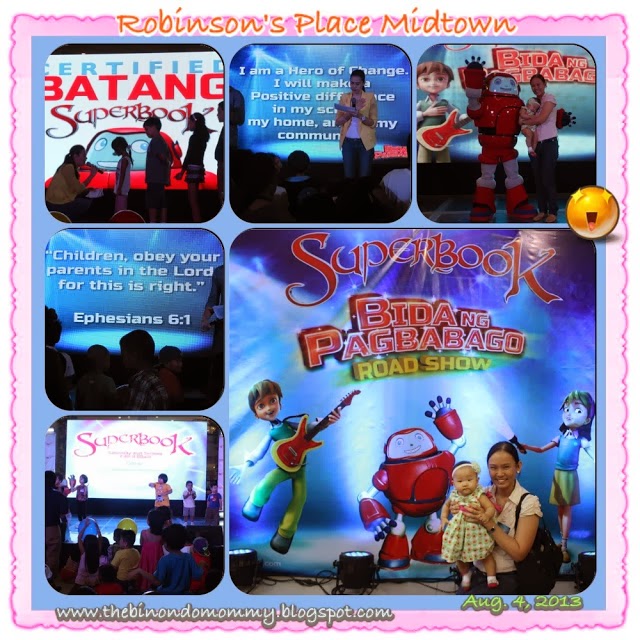 To keep you updated on Superbook's excitement:

Don't forget to watch tomorrow's (Aug. 10) Episode 11: He Is Risen.
Superbook is showing every Saturdays and Sundays 7:30-8:00 am only in GMA 7.
Enjoy and have fun with your weekends!