Last Sept. 18, 2014 during the 2nd day of the 35th Manila International Book Fair, I was fortunate to be able to witness the book launching of Moymoy Lulumboy which was held inside Meeting Room 5, 2/F SMX Convention Center.

It was I think my first time to attend a book launch. The event started out with a simple lunch buffet, followed by the introduction by Mr. Toots Tolentino, then a musical performance, a little question & answer portion for the authors and finally the book signing and picture taking.

Moymoy Lulumboy: Ang Batang Aswang, as the title implies, is a fictional series that revolves around a little boy named Moymoy, son of a goddess and vampire-like ghoul but raised by humans and has an evil twin. Both the twins hold the map to the sacred treasure place owned by the gods where the villain stole gold bars from in lieu of his own personal greediness which caused the great curse to the whole Land of Gabun.

It is an original Filipino mythology-adventure series for young adult, published by Lampara Books, written by Segundo Matias Jr. and illustrated by Jomike Tejido.


After 2 months, I've finally finished reading the entire novel, to think that I rarely finished a book cover to cover. Actually, it was an interesting read that it made my imagination fly and emotions move. I just find it a little challenging as some of the Filipino words were too deep for me but I still managed to get through from the context clues. The story started out from a modern setting that is very common to us here in the city and ended in a laidback world where legendary creatures live. The author invented new terms to refer to certain group of people and their actions which you'll get used to  as you go along. The most fun part was when creatures shape-shift and transform into another weird form of creature, bodies being cut into half and grown wings, and other magical transformations. I admire Kuya Jun's creativity in weaving the story where he made it hard to predict the next scene and also the illustrator's creativity in making the characters and scenes very native and artistic.

Although this is only the first installment of the Moymoy Lulumboy's series, the story had a happy ending. I bet if this becomes a movie, it will be more visually appealing. Despite its title being 'aswang' connoting evil creatures, the story centers on good values with moral lessons that are applicable to our everyday life. That's another thing that made this book worth reading.

Watch this 9-minute musical performance which I have personally recorded to give you a brief idea on the story of Moymoy Lulumboy. Kudos to the FEU Theater Guild for an exemplary acting and singing performance! 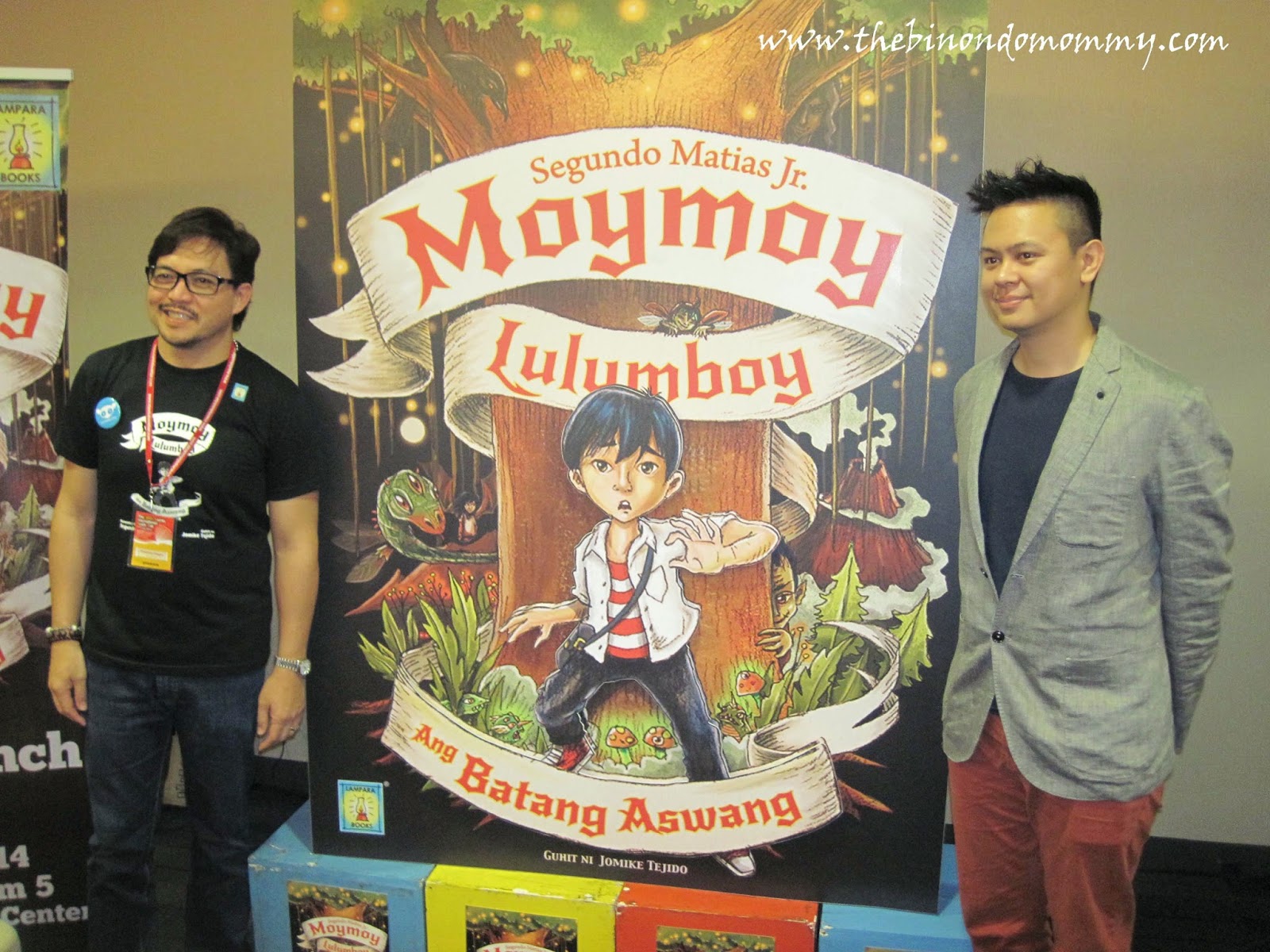 Now, watch this short interview with Segundo Matias Jr by Amelyn Veloso of Solar Daybreak and get to know what inspired the author to write the book. Matias, an advocate of children's literacy, was especially invested in the making of this series. A native of Pampanga, he recalls his childhood was spent playing in rice fields and riversides. His play time was enriched with stories of aswang, duwende and other Filipino mythologies. He fondly remembers wondering as a child if 'lamang-luma' and other folk stories were true. Now as an adult living in the city, the strange foliage and trees of the city still raises the same curiosity. He aims, through his work, to inspire that same curiosity in others, prompting them to ask if worlds of magic do really exist. With the advent of foreign young adult book series such as Harry Potter, Twilight and the like, Matias set out to make a series with the Filipino audience in mind.

About Jomike Tejido
- an award winning artist-illustrator with more than 70 books to his credit as author and illustrator, including illustrations for Oxford University Press and Scholastic
- a member and one-time president of Ang Ilustrador ng Kabataan (Ang INK), an organization of children's books illustrators
- has received awards and recognition from Noma Concours Japan, PBBY-Alcala Illustrator's Prize, International Board on Books for Young People, and Golden Book Award
- published "Tagu-Taguan" (Best Reads 2010), "Pundido" (Golden Book 2002), "Ma-Me-Mi-Mumu!", "Foldabots Toy Books" and the "Jepoy Dyip" series
- banig painter whose paintings have been exhibited in solo shows in Manila and in group shows in Tokyo, Paris and USA
- Through his work, he aims to showcase the richness of Filipino culture.
- a toy enthusiast, a soccer fan and loves to travel in order to see the different cultures here and abroad

- brings to children, parents and teachers the brightest stories from the current harvest of children's literature in the Philippines and all over the world
- each story is carefully written and retold by budding and award-winning Filipino writers and illustrated by illustrators of children's books
- features unique and exciting characters, places, themes and experiences that will kindle the imagination, emotion and mind of young readers
- each book is written in two languages, Filipino and English, to reach a greater number of readers in the Philippines and in other parts of the world
- hopes that the lessons and values learned in these stories will serve as light that will guide young readers to grow up with a profound love for books and reading, a deep respect for themselves, for others and for the environment, and a keen awareness of their roles as good and responsible members of society

What is your take on the book Moymoy Lulumboy? Share with me in the comment section below.